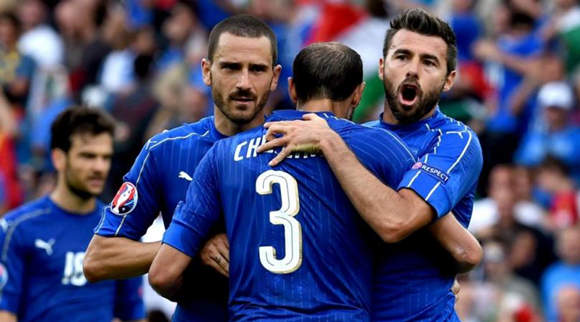 It is almost 10 years to the day that Germany failed to break down the 'Berlin Wall'.

That was the nickname given to Fabio Cannavaro following his influential role in Italy winning the 2006 World Cup, and, in particular, his 'thou shalt not pass' display against the host nation in the semi-final.

The Azzurri captain was the defensive rock on which Marcello Lippi built his side.

Fast forward to Euro 2016 and Italy have a similar foundation, but this time it's not a one-man band; it's the Juventus trio of Giorgio Chiellini, Andrea Barzagli and Leonardo Bonucci.

Forget the Berlin Wall, finding a way through this rearguard is akin to scaling the walls of Turin's iconic Fiat factory.

But that is the task facing Germany in Bordeaux on Saturday night with a place in the last four of Euro 2016 up for grabs.

Conte departed for the Italy job, but continued to trust those who served him so well at club level. It was a policy that continues to reap rewards.

Italy have conceded just once in four games in France, and that was against the Republic of Ireland, when, with qualification secured, Conte rested Chiellini, as well as Buffon.

They were reunited for the last-16 game against Spain and shut out the two-time defending champions and club team-mate Alvaro Morata in an impressive 2-0 victory.

Morata was a fan of the BBC (not to be confused with Real Madrid's Gareth Bale, Karim Benzema and Cristiano Ronaldo) even beforehand, telling Marca: "Barzagli, Bonucci and Chiellini are the best defenders in the world. Teams don't want to play against them.

"When they play together as a three, it's almost impossible to score a goal."

And yet Germany will have to manage it in order to progress, but the side's record against Italy in major tournaments makes for unhappy reading for Joachim Low's men: played eight, won none, drawn four and lost four. They have also lost all three meetings in knockout matches.

Germany midfielder Toni Kroos shrugged off that record in brusque fashion - "Why would I be worried about Italy? I wasn't playing back then" - but the Real Madrid man knows exactly what to expect in Bordeaux.

"It is well known that the Italians are difficult to play against. They are incredibly compact , very clever with a great defence," he said.

Knowing how they play is one thing. Finding a way to combat it is quite another.

Italy arrived at Euro 2016 with low expectations, but they are gathering momentum quicker than any of the other realistic challengers.

And in Conte they have arguably the most passionate coach at the tournament. His will to win could prove the difference as he looks to guide his country to success before taking up the Chelsea job for the start of next season.

And there is no doubt he will be instilling that drive into his players.

The parallels to 2006 are striking, as Cannavaro himself explained: "We were strong, but not the strongest, Lippi told us from day one that we could win the trophy. After the final it changed the lives of all of us: from being regular players to legends."

And if they do achieve it, it would have been a triumph based around Italy's latest defensive wall.